IRVING, Texas – As the Cowboys focus on the offseason, training camp is just days away.

With just four days until the Dallas Cowboys take the field in Oxnard, Calif., one question centers on DeMarcus Ware closing-in on the team’s sack record and where that might put him among the franchise’s best players.

Where does DeMarcus Ware rank among Dallas Cowboy greats?

Barring any significant injury – and if 2012 showed us anything it’s that it takes a lot more than just an average injury to sideline DeMarcus Ware – at some point early this season the Cowboys will have a new all-time sack leader.

The late Harvey Martin has held that distinction since he retired in 1983, sitting at the top of the charts with 114 sacks. Ware currently has 111, meaning he needs just four more sacks this year to surpass Martin as the Cowboys’ all-time leader.

Officially, according to the NFL, Ware already holds the mark because the league didn’t start registering sacks as an official stat until 1982. But the Cowboys have kept the correct stats and Martin has had the lead for 30 years. That will likely change this season, considering Ware hasn’t been held under double-digit sacks since his rookie year of 2005.

So when that happens, what will it mean for DeMarcus Ware’s legacy with the Cowboys? Will it even change at all?

Martin holding the club’s sack record hasn’t been enough to land him a spot in the Ring of Honor. Many pundits believe Martin is the biggest snub of the Tom Landry era and is the most deserving to get into the Ring. However, Ware is seemingly a lock for the Ring of Honor when his playing days are done.

But even if he never plays for a championship team, is it possible for Ware to be considered one of the best defensive players in Cowboys history? Stats-wise, he’ll be more accomplished than Bob Lilly or Randy White and Martin. But those guys have Super Bowl rings.

Just how far does Ware have to stretch the sack record to overlook his lack of team success? Then again, Ware turns 31 next month. He still has a few good years in him and who knows what the Cowboys will do as a team over the next few seasons.

Sticking with our numerical journey to training camp, let’s take a closer look at the number 4: 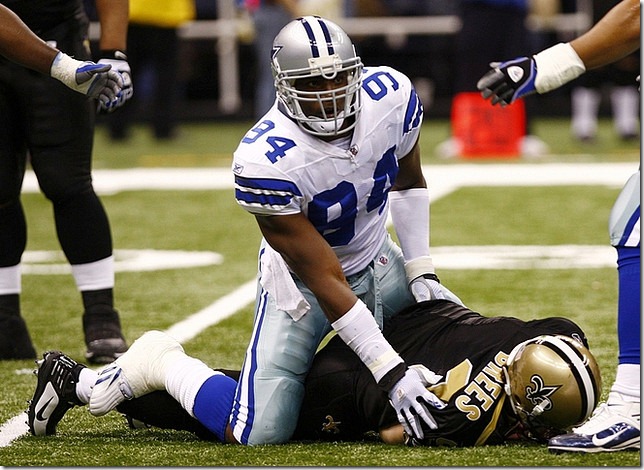 For the sixth straight year, The Associated Press has included outside linebacker DeMarcus Ware on the All-Pro team. And he’s a first-team pick for the fifth straight season.

Ware finished second in the NFL with 19 ½ sacks, just missing becoming the first player in league history to record two 20-sack seasons in his career.

While Ware did finish with nearly 20 sacks, there was a thought he could seriously break Michael Strahan’s sack record of 22.5, which is still standing although Minnesota’s Jared Allen came close this year with 22.

After seven games, Ware had 12 sacks, thanks to his first-ever four-sack game against the Eagles. But after that game, Ware’s pace slowed, about the same time he suffered a stinger injury that lingered for most of the final month of the season.

While it was a rather quiet afternoon for DeMarcus Ware for most of Sunday’s game with the Redskins, he did record a key fourth-quarter sack, upping his total to 14 through 10 games.

Not only did that put him ahead of Minnesota’s Jared Allen, who remained at 13.5 on Sunday, but it keeps him right on pace to tie or just surpass Michael Strahan’s single-season record of 22.5 sacks.

The math isn’t exact here, but Ware is averaging nearly a sack and a half for each game. With six games left, Ware is on pace to record somewhere between eight or nine sacks for the rest of the regular season.

Even if he falls off the pace a bit, Ware has a four-sack game this year against the Eagles and has numerous multi-sack games for his career. So it’ll likely come down to the season finale against Strahan’s former team, the Giants, in the regular-season finale on Jan. 1.

The question is where Allen will be on the stat sheet.

Along with the NFL records, Ware is also moving up the charts on the Cowboys’ all-time sack list. He recorded his 94th career sack on Sunday, moving him in a tie for seventh in team history, equaling Bob Lilly.

By the end of the years, it’s realistic to think Ware will be fourth in club history, passing Jim Jeffcoat (94.5), Jethro Pugh (95.5) and George Andrie (97). The all-time record for sacks in Cowboys history is 114, set by Harvey Martin.