THE TEXAS-2-MUCH SCHEME: Despite turnovers, Dallas Cowboys defense on pace to be worst in NFL history

DETROIT — The Dallas Cowboys defense has improved in the turnover department.

They forced four turnovers Sunday and have 18 on the season, two more than they had all of last year. But those turnovers weren’t enough to get them a victory, as they became the second team in NFL history to lose a game when having a plus-4 turnover margin.

“That’s a shame,” defensive coordinator Monte Kiffin said. “We talk about turnovers and we did what we needed to do. We just didn’t make things as tough as we should have and of course we didn’t stop the pass. You can’t give up big chunks like that, gosh darn it.”

The turnovers were nice and are usually the difference maker in the outcome, but the yardage allowed by the Cowboys’ defense is staggering this season.

Detroit Lions receiver Calvin Johnson had 329 receiving yards, the second most all-time in a single game. More troubling, though, is that the Cowboys’ defense allowed the Lions to march 80 yards in 50 seconds in what proved to be the game-deciding drive late in the fourth quarter. Earlier in the fourth quarter, they allowed two eight-play, 80-yard touchdown drives.

Said defensive tackle Jason Hatcher: “I put it on the defense. We should have closed the game out and we didn’t.”

Jay Ratliff left the building only a week before his No. 90 and his locker went to another defensive tackle. Marvin Austin has taken over both after the Dallas Cowboys signed him Tuesday.

Austin spent two seasons with the Giants after they made him a second-round pick in 2011. He spent two games with the Dolphins this season before his release Oct. 15.

“It’s definitely a new beginning and a lot to build on,” Austin said.

Austin, listed at 6 foot 2, 312 pounds, still was pouring with sweat a half hour after practice. He admits he is not in football shape.

“His record speaks for itself and coach [Monte] Kiffin also,” Austin said. “The way that those guys coach, and the success they’ve had in this league, I have no excuses.”

IRVING, Texas – The Dallas Cowboys’ top tackler of the season earned the team’s first NFC Defensive Player of the Week honors this year for his performance in last weekend’s 17-3 win against the Eagles.

Sean Lee was given the honor after recording one of three Cowboys interceptions in the win and leading the team with 11 combined tackles, including one for a loss, marking the fifth straight game he’s led the team in tackles.

The interception was Lee’s second of the year, and it’s also the second time in Lee’s career that he’s been named the NFC Defensive Player of the Week. He last was given the honor his rookie season for his performance against the Colts on Dec. 5, 2010, in an overtime win against Peyton Manning. Lee recorded two interceptions that game, including one for a touchdown.

That 2010 season included three NFC Defensive Player of the Week honors for Cowboys players. DeMarcus Ware and Bryan McCann were both named defensive players of the week, in addition to Lee.

The last Cowboys player to take home NFC Defensive Player of the Week honors before Lee this week was Brandon Carr last season for his performance against the Steelers. No Cowboys player won the award in 2011.

Dwayne Harris is the only other player to be given player of the week honors this year. He’s been named the NFC Special Teams Player of the Week twice this year, once for his returning skills and once for his coverage skills.

IRVING, Texas – The Dallas Cowboys have once again added another defensive lineman. This time, he’s a little more well-known than some of the others.

The Cowboys have added beefy Marvin Austin, a former second-round pick of the Giants in 2011. Austin missed all of his rookie season with a torn pectoral muscle and played in just eight games last year for the Giants, who cut him after the last preseason game. Austin was then picked up by the Dolphins but cut two weeks ago.

The Cowboys had an open spot on the roster having putting defensive end Edgar Jones (groin) on injured reserve.

Austin is a former college teammate of Dallas Cowboys linebacker Bruce Carter, who was also taken in the second round of the 2011 draft. 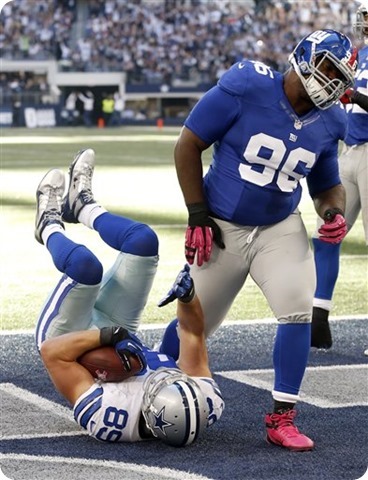 Today, coach Jason Garrett commented on Austin’s versatility as a tackle, stating, “he can play both defensive tackle spots.”

“What we know about him is a lot of really positive things,” Garrett said. “There are some positive physical traits and some positive character personality traits you want to tap into it. You want to give a guy a blank slate when he comes in and hopefully the environment you create for him brings out the best in him.”

Austin is yet another player high-profile college player whom the Cowboys have added to bolster the defensive line depth, along with George Selvie and Drake Nevis, a former LSU All-American and third-round pick. Selvie was a college standout at South Florida but taken in the seventh round.

The Cowboys have also signed veteran Jarius Wynn last week and played him in the game against Philadelphia. Jason Vega was signed last week to make his Cowboys debut with DeMarcus Ware ailing.

Overall, 14 different defensive linemen have suited up for the Dallas Cowboys in the first seven games.

The Dallas Cowboys are hoping Marvin Austin is ready to become the 15th this weekend in Detroit.