James Harrison says this is the best he’s felt physically since 2008, the year he won NFL Defensive Player of the Year honors.

After 10 grinding seasons as a star linebacker for the Pittsburgh Steelers, that’s an impressive claim. Harrison’s ability to land a multiyear deal from the  speaks to his success in maintaining his physical condition.

So how has Harrison — now 35 — held off Father Time? Dedication is a huge part of it. Being rich helps too.

“You want to be able to stay in this business for awhile, you’re gonna have to take care of your body,” he said. “If you want to do that, you’re going to have to spend money, it’s not cheap.”

OK, but half a million dollars? This kind of seems, well, impossible, and a reporter in attendance astutely asked how the bill gets so high.

Harrison explained that he owns a hyperbaric chamber and keeps six different masseuses on his payroll, in addition to a homeopathic doctor, chiropractor and acupuncturist.

Harrison said his Steelers teammates used to call him a “massage whore,” a name earned by the 2-4 hours of massages he receives each day. Harrison said he auditioned around 150 massage specialists before settling on his rotation.

This is all real stuff said in real press conference in front of real reporters. Remember James Harrison the next time a $19.99 gym membership gives you pause.

OFF THE FIELD BLUNDER: Cleveland Browns wave off white-flag giveaway 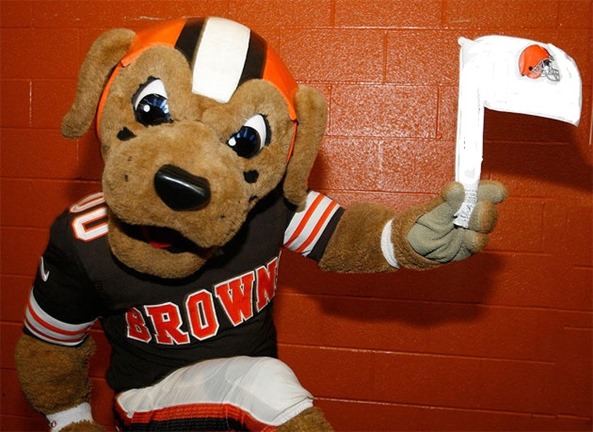 CLEVELAND (AP) — The Cleveland Browns have waved off their white-flag giveaway.

Following days of criticism, the Browns have decided to cancel a promotion to hand out white flags to fans before Sunday’s game against the rival Pittsburgh Steelers. Because white flags symbolize surrender, the giveaway seemed to imply the Browns were giving up against the Steelers, who have won 16 of the past 17 games between the AFC North foes.

Browns spokesman Neal Gulkis said in a statement on Saturday that the team scrapped the idea "in the best interests of everyone. It is something that was intended to be fun for our fans and that they could rally around, and we regret that some didn’t perceive it that way."

The flag giveaway was poorly received by many Browns fans and even some players. 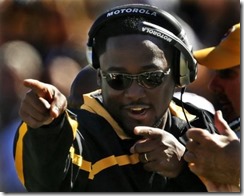 The Pittsburgh Steelers announced they have extended coach Mike Tomlin’s contract through the 2016 season.

Tomlin, 40, was entering the final year of his contract, although the team had an option for 2013. Financial terms of the three-year extension weren’t released, but Tomlin was the sixth-highest paid NFL coach for this season, according to Forbes magazine.

"I am excited that I will continue to be the head coach of the Pittsburgh Steelers for years to come," Tomlin said in a statement. "I am grateful to the Steelers organization for the opportunity I have been given over the past five years to work and live in this great city, and I am excited to continue to work to bring another championship to the Steelers and the city of Pittsburgh."

Tomlin, who is entering his sixth season as the Steelers’ coach, became the youngest coach in NFL history to win a Super Bowl, when he led the Steelers to a 27-23 win over the Arizona Cardinals in February 2009. He also reached the playoffs four times in his first five seasons, including two trips to the Super Bowl.

"We are pleased to announce that Mike Tomlin will remain with the Steelers for at least five more years," Steelers president Art Rooney II said. "Mike is one of the top head coaches in the National Football League and we are thrilled he will continue to lead our team as we pursue another Super Bowl title."

AROUND THE NFL: Colt McCoy’s rough ride as a Cleveland Brown

Once upon a time, Cleveland Browns quarterback Colt McCoy was the cool new kid in Cleveland. He had high hopes, even if it wasn’t his stated goal to be the greatest thing that’s happened to the city .

Two humbling seasons later, McCoy has learned how tough the NFL can be .

“There’s been some ups and downs and things you have to fight through. Most are things out of your control. But for me, I would just like a little consistency. I love the town. I love the fans. I think they truly deserve a winning football team. That’s what I want to do. I want to be there for the ride of turning that thing around. We’ll see what happens.”

We continue to believe that the Browns will ultimately trade McCoy . Seneca Wallace fits naturally as a backup, and the Browns could potentially get a conditional late-round pick for McCoy during training camp. The Texas product hopes that doesn’t happen.

“I really like Cleveland,” McCoy said. “I’ve always been a guy that wants to finish what he starts.”

In the interview, McCoy repeatedly talked about handling the things he can control. At this point, we’re not sure McCoy can do anything to change the minds of the Browns brass. Only a Brandon Weeden training-camp injury would truly give McCoy a chance to start again.

REALITY CHECK: In the NFL, there is no such thing as a weak schedule

IRVING, Texas — Seems some fans are ticked that the Dallas Cowboys tied for the 11th-toughest schedule based on 2011 records while last year’s top playoff seeds, the Packers and Patriots, supposedly have it easy.

Bottom line is this: nobody in the National Football League gets a weak slate. "Schedule strength" applies to all 32 times. That’s parity, folks.

The Cowboys tied for the 15th-toughest schedule in 2011, but some of their so-called "easier" games — San Francisco (6-10 in 2010) and Detroit (6-10 in 2010) — weren’t so simple. Sure, Tampa Bay and Philadelphia played well below expectations, but the Eagles certainly didn’t show it in two blowout wins over Dallas. And no NFC East game is a cakewalk, anyway.

This year the Cowboys have another third-place schedule, but the entire division plays the NFC South and the AFC North. The only difference is the Giants get fellow division champs Green Bay and San Francisco, while the Cowboys play fellow third-placers Chicago and Seattle.

Even then, both those opponents could compete for a playoff spot. The Bears will be better if they get protection for Jay Cutler, and the Seahawks were a team on the rise by the end of 2011.

No matter what the computer says, the Cowboys always have to claw and scratch to get back to the postseason. December/January probably will include multiple division and primetime matchups — great for ratings, but not for Dallas. That’s the price of being America’s Team.

Twelve of the Cowboys’ 24 games under Jason Garrett have been decided by a field goal or less. No one said winning would be easy in 2012, either.

The playoff picture is starting to come into focus on this happy note: Win and you are in as a division champion.

That’s the easy scenario for the Broncos and either the Cowboys or Giants. And while Baltimore already owns at least a wild-card spot, a victory for the Ravens will earn them the AFC North and a first-round bye.

Denver is tied atop the AFC North with Oakland at 8-7, with the Broncos hosting the Chiefs on Sunday, and the Raiders at home for San Diego. Denver has the tiebreaker, but if it loses and the Raiders win, the Broncos can’t get a wild card. The Raiders can get a wild card if both they and Denver win, as long as Cincinnati and Tennessee lose, or Cincinnati loses and the New York Jets win. Got it?

In first place in the woeful NFC East are the Cowboys and the Giants, who meet at the Meadowlands. A win or a tie will give New York (8-7) the East title; neither team can be a wild card.

END_OF_DOCUMENT_TOKEN_TO_BE_REPLACED

For a comprehensive look at the 2011 NFL Playoffs, check out the new PLAYOFFS page on The Boys Are Back blog … or click HERE.

2011 NFL PLAYOFF TRACKER: Follow the drama right here, on The Boys Are Back blog

Keep up with the ever-changing NFL Playoff race right here, on The Boys Are Back blog.

x-clinched playoff berth
y-denotes division winner
z-denotes first-round bye
*-clinched home-field advantage
During the regular season, the seeds reflect how the playoffs would stand if the season ended up to that point. The NFL playoffs are not based on a pure bracket system. In the divisional playoffs, the No. 1 seed is assured of playing the lowest-seeded Wild Card survivor. There are no restrictions on intra-division games and the higher seed of any matchup will have home-field advantage.