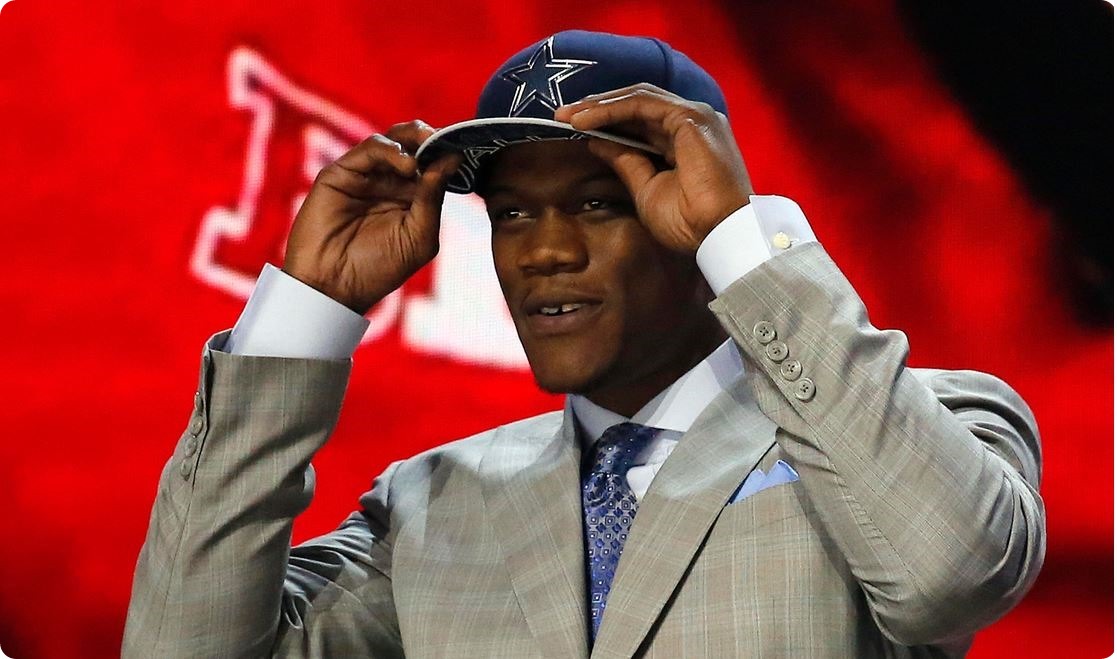 The Dallas Cowboys took another step toward fortifying their defense in the second round, selecting Nebraska defensive end Randy Gregory with the 60th overall pick of the 2015 NFL Draft.

Gregory (6-4, 235) was one of the Dallas Cowboys allotted national visits to Valley Ranch and many linked him to Dallas in the first round at No. 27. Instead, the club took Connecticut cornerback Byron Jones and were delighted to see Gregory still there at No. 60.

Considered one of the top edge rushers in this year’s class, Gregory was a two-time All-Big Ten selection in two seasons for the Huskers, registering a combined 17.5 sacks and 29 tackles for loss.

Gregory entered the draft after his junior season, but his stock likely dropped after he failed a drug test at the NFL Scouting Combine in February.

The Cowboys needed help at defensive end given Greg Hardy’s upcoming NFL suspension and their overall pass rush inconsistency last season. They ranked near the bottom of the league with 28 sacks. DeMarcus Lawrence, the club’s 2014 second-round pick, and veteran Jeremy Mincey are back to form a solid pass rush rotation with Gregory and with Hardy when he returns.

Earlier this week, I teamed up with Bryan Broaddus for a Point/Counterpoint article on the idea of drafting players with some off-the-field incidents and baggage.

I took the point that sometimes these guys aren’t worth the risk, and we specifically mentioned Nebraska’s Randy Gregory.

Now that Gregory is a Dallas Cowboy, I’m not going to back off my opinion. At the No. 27 pick in the first round, taking Gregory, who failed a drug test at the combine, isn’t worth the risk.

In this league, you really can’t miss on your first-round pick, which is why the Dallas Cowboys went after a rather safe and solid pick in Bryon Jones.

But in the second round, and every round after that, it’s about value. You can’t get better value with the 60th overall pick than Gregory.

It’s just not the same argument. The Cowboys can take a risk on a player like Gregory at No. 60 because the pressure to be elite isn’t the same. The reward outweighs the risk because if he comes in, stays humble, works to correct his issues and takes to good coaching, he could be one of the best pass-rushers in the draft.

If not, well then he falls in line with yet another second-round pick that didn’t pan out. It’s not ideal because you’re still counting on these guys to contribute. But second-rounders who don’t help you consistently doesn’t exactly set you back for years to come.

Byron Jones wasn’t the best on the board at No. 27 in terms of talent. As it turns out, Jones was the second-best player the Cowboys had rated. The first was Gregory – a risky pick at No. 27. Those risks were diminished a round later and that’s why both of them will be paired together as the two newest players on the Cowboys’ defense.

Honors: A first-team All-Big Ten selection for two straight years. He led the conference in tackles for loss (19) and sacks (10.5) as a sophomore in 2013. He was a second-team and third-team All-American from several media outlets in 2014.

Key stat: Gregory blocked two kicks in one game in 2014 against Minnesota. But his best trait is getting to the quarterback. Gregory finished his career with 17.5 sacks, ninth in school history. But he’s the only Husker in the Top 10 in sacks to play less than three seasons.

Scout’s Take: Gregory has initial quickness off the snap. Explosive player. Thought he needed to show more counter moves off the snap. There are snaps where he gets tied up on blocks. Will go find the ball. Can redirect. Will work down the line. Tries to fight power. Will get washed when he is not in position to take on the blocker. Was able to get his hands down to play the low block. Can get to corner, but would like to see him capture it more often. Arm-over has been best move. Works to keep outside arm free. Has a burst when going to the ball. Can get blockers weight up the field, then rush inside. Plays his assignments. Gets hooked at times. Better job of using his hands to snatch the blocker. Has a hard time throwing the blocker. Would like to see him close hole better. Blockers can widen him out. Has some bend to him. Best trait is his burst. Doesn’t have great upper body strength. Physically looks like a 3-4 outside linebacker. Tall, thin and lean but could see him play as a right defensive end for the Cowboys. Works down inside. Has played on both left and right sides.  Showed power in Miami game – was able to walk the tackle back. Some snaps as a standup guy and his rushes were better. Worry that I don’t see him breaking down tackles on his rushes. There are some snaps where he plays lazy, especially on the goal line.  Doesn’t always play on his feet. Jumped over cut block stayed on feet and got sack. No question a first round talent, but some off the field questions of failed tests and if you are willing to work around that could provide some juice off the edge.  — Bryan Broaddus

There’s tons of audio coverage on the Randy Gregory selection over on the Dallas Cowboys Audio Archives page … check it out!