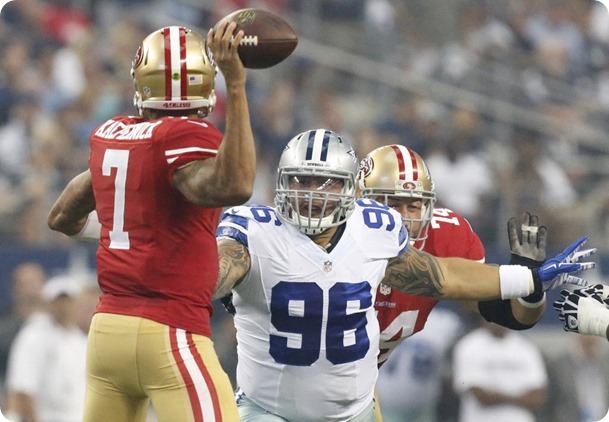 IRVING, Texas – The Dallas Cowboys did not need to restructure any contracts to get Greg Hardy‘s contract to fit under the salary cap. Yet.

By the time the third week of the regular season rolls around, they will have to account for roughly $8.1 million in the remaining $9.25 million per-game roster bonuses Hardy will receive throughout the season as long as he is on the 53-man roster.

Because he was on the Carolina Panthers’ 53-man roster for two weeks in 2014, 14 of the per-game bonuses are considered not-likely-to-be-earned and will hit the cap one week at a time at $578,125 per game. If he is suspended or on injured reserve, the Dallas Cowboys would receive cap credits for each game he misses.

So how do the Cowboys get that cushion?

There are several ways. They could sign Dez Bryant to a long-term deal so he doesn’t count $12.823 million against the cap (from the franchise tag). They could gain $8 million in space by designating Brandon Carr a post-June 1 cut, but then they would need a cornerback.

The easiest and most likely way is to restructure the contract of quarterback Tony Romo. The question is when they do it.

As the Cowboys mapped out their offseason plan, they intended to re-work Romo’s contract all along, but instead of taking a small chunk of the quarterback’s $17 million base salary to avoid larger cap figures in the future, they will likely have to re-do the full amount.

The Cowboys can create about $12.8 million in cap space, but turning $16 million of Romo’s base salary into signing bonus, which would trim his salary-cap figure from $27.773 million to $14.973 million.

The good: that money will allow the Cowboys to cover Hardy’s roster bonuses, give them money for their draft picks as well as smaller potential signings and their practice squad.

The bad: Romo’s cap numbers from 2016-19 will increase by $3.2 million per season. He turns 35 in April and it’s always risky to add cap figures on players as they get older.

It’s not the best way to manage the cap, but the Cowboys felt like getting a game-changer like Hardy was worth the potential cap implications in the future.

IRVING, Texas – The Dallas Cowboys have agreed to terms on a one-year contract for veteran defensive tackle Nick Hayden (see photo above), further bolstering their numbers on the defensive line and bringing Hayden back for a third season with the team.

The news comes one day after the team addressed the defensive end position by signing Pro Bowler Greg Hardy to a one-year contract. Hardy has been among the NFL’s top pass rushers in recent seasons, with 34 total sacks in 39 career games.

The decision to re-sign Hayden isn’t quite as flashy. The 29-year-old is more of a run-stuffer than a pass-rusher, as he boasts just two career sacks in 60 career games. Hayden has been the model of consistency since the Cowboys signed him in February 2013. He has started all 32 games of his Cowboys career, and he led all defensive linemen in tackles last season, posting 52.

Hayden fills a need for bodies on the interior of the Cowboys’ defensive line, as Tyrone Crawford, Terrell McClain and Josh Brent had been the only experienced defensive tackles on the roster to this point. Hayden has been the starter at the one-technique in both seasons under defensive coordinator Rod Marinelli.

The signing should also start to clear up the Cowboys’ gameplan for the defensive line as a whole in 2014. The addition of Hardy gives them a trio of talented defensive ends to work around, while Hayden’s re-signing gives them numbers at defensive tackle.

Both positions remain prime candidates for attention in next month’s draft, however.

IRVING, Texas – It’s common knowledge at this point that the Dallas Cowboys need help rushing the quarterback, and they certainly seemed to get it Wednesday.

Cowboys owner/general manager Jerry Jones witnessed first-hand in 2014 what a top-notch quarterback can do for a franchise. With the signing of Pro Bowl defensive end Greg Hardy to a one-year contract, Jones said he thinks he’s added someone who can have a Tony Romo-like impact on defense.

“These players that can put pressure on the quarterback are rare,” Jones said Wednesday afternoon. “They’re as rare as franchise quarterbacks. From what we’ve seen of his play, he’s in that category.”

That’ll certainly be the hope for a Dallas defense that tallied just 28 sacks last season. Hardy has been one of the league’s top pass rushers in recent seasons, as he has compiled a whopping 27 sacks in his past 32 games.

“Well, the biggest need, in my view, that we have this coming year, 2015, is to get some pressure on defense. Greg directly addresses that,” Jones said.

Of course, there’s no denying the inevitable: the addition of Hardy is going to bring more than just added pressure to the Cowboys’ pass rush. The fifth-year veteran was charged with assault against his then-girlfriend last summer and spent 15 games on the commissioner’s exempt list last season.

Even after signing with the Cowboys, it’s likely the league will levy some kind of discipline on Hardy – in the form of either a four or six-game suspension. That helps explain the particulars of the contract, which doesn’t include any guaranteed money and lists incentives for games played and sacks accrued.

“We structured it so that our risks were as minimal as we could expect and get us a pressure player,” Jones said.

All of this is bound to bring some scrutiny on the Dallas Cowboys, as domestic violence issues have marred the league’s image in the past year, largely due to incidents surrounding Hardy and former Ravens running back Ray Rice.

The decision was something Jones said he weighed carefully.

“We have spent a great deal of time over the last two days in meeting with Greg directly and gaining a solid understanding of what he is all about as a person and as a football player,” he said.  “A thorough background review of him, involving many elements of our organization, has been ongoing for the last few weeks.”

The addition of Hardy brings a Pro Bowler into Valley Ranch just six days after the Cowboys lost one in the form of DeMarco Murray. Up until this point, the loss of Murray to the Philadelphia Eagles was the dominant storyline of the Cowboys’ offseason.

Asked about that decision, Jones noted that the Cowboys wouldn’t have been able to upgrade their defense without some hard choices on the offensive side of the ball.

“We couldn’t have made this deal had we not shown some prudence and been managing our cap. You just can’t have it all,” Jones said.

He added: “We think we had a better chance to make up for what we were missing in DeMarco than we did finding somebody that could put the pressure on, on defense the way that Greg can. So that’s made the decision.”

It might have taken a week, but that decision seems to have given the Cowboys the difference-making defender fans have been calling for.

HEAR FOR YOURSELF: Listen on your computer/phone | MP3 downloads | Video link

Cowboys Break: The Greg Hardy Signing & “The Right Kind Of Guy” | Listen/Download | Discussion of the Greg Hardy signing and what he’ll bring to the 2015 Dallas Cowboys defense.

On Air: Weighing The Risks With Greg Hardy | Listen/Download | Star Magazine hosts talk about the week’s news, including the Greg Hardy decision.