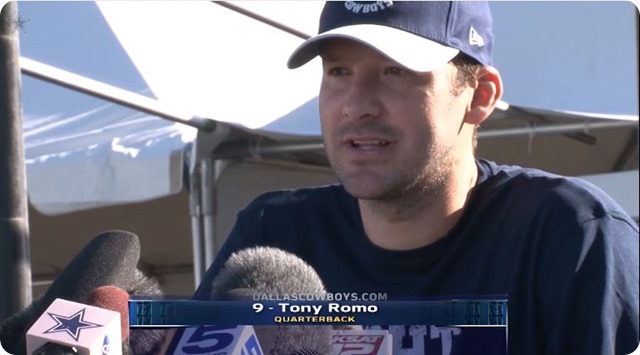 Tony Romo: Just starting to be the player I want to be | 8:07 | Dallas Cowboys QB Tony Romo talks about managing reps while at training camp, his injury status, and why he thinks his best years are head of him. (Watch | Listen)

OXNARD, CA – For all intents and purposes, Tony Romo’s first practice of 2014 Training Camp looked a lot like his limited work during the Dallas Cowboys offseason program.

Romo took an active role in the early, individual part of practice, though he limited himself as the afternoon wore on – despite the fact that the offense and defense didn’t work against each other and won’t until Saturday.

Regardless, Romo said he feels 100 percent as the Dallas Cowboys prepare to ramp up training camp, and he figures to feature prominently when the first live practice begins on Saturday.

“Today, without going against the defense, I felt like, ‘Let’s be smart,’” Romo said. “Talking with the trainers and coaches and coming up with a plan, there was a certain number we were going to throw and I was able to hit that before I got through it. I was like, ‘I could keep going but we have this process going in and we’re going to stick with it.’”

The “pitch count” is going to change and increase as camp goes along, but Romo said he’s content to take things easy initially. But to hear it from him, 2014 is just a small step. Going along with his similar quote from earlier in the summer, Romo reiterated that he hopes to play well into the future, even joking that he’d like to play until he’s 45.

“I feel personally like I’ve just started to come into the player that wanted to be six, seven years ago,” he said. “I think and I’ve said it before but I think over the course of the next four or five years, you’ll see the best version of me that I’ve had throughout my career.”

There’s no doubt the Dallas Cowboys would love to see that prediction come to fruition. They aren’t too keen to rush into things, however, which is why you can expect Romo’s progression to remain gradual.

“He threw the ball around well. It’s a work in progress. We’re not trying to win the East tomorrow,” said Cowboys executive vice president Stephen Jones. “It’s a long training camp and the last thing we want to do is act like we’re playing Sunday with him. We want to be conservative but at the same time give him the work he needs.”

It’s hard to judge based on the nature of the work, but new defensive tackle Henry Melton looked fast and fresh during position drills at the afternoon practice. Much like Romo, the Dallas Cowboys have worked Melton back slowly from his torn ACL, and he is fully healthy for training camp. The plan is to ease him back into the full rigors of camp, but he looks capable of handling it.

“I’ve been listening to the strength and training staff, I’m not going to do anything they don’t want me to do,” Melton said Thursday. “I think that’s one of the reasons I haven’t had any setbacks. I feel good.”

Dallas Cowboys coach Jason Garrett said at his afternoon press conference that he’s hopeful Ronald Leary can return to practice after a slight hamstring tweak. It doesn’t appear the injury is serious, but the sight of Mackenzy Bernadeau getting plenty of reps at left guard alongside Travis Frederick and Zack Martin has got to be a motivator. The battle between Leary and Bernadeau promises to be one of the most heated of camp.

Tyrone Crawford said he hadn’t spent much time thinking about the season-ending Achilles tear he suffered on the first day of training camp last year – at least not until reporters asked him about it.

The Dallas Cowboys appeared to make it through Day 1 without any setbacks, which was part of the plan of having a scaled-down start to camp.

When people think of sled workouts, they think of the big boys. But it was secondary coach Jerome Henderson who had his corners and safeties slamming into the sleds on a side field showing their strength, with Monte Kiffin standing on the sleds watching on.

Henry Melton – A month or two ago, no one expected Melton to be full go for the start of training camp after rehabbing his knee. Not only was he ready to roll, participating in every drill, but he looked as quick as any player on the line as he ripped through the dummies during the individual defensive drills.

Tony Romo – The Dallas Cowboys are still going to take it easy on their franchise quarterback, but just to see him on the field working with the first unit for the start of camp was a plus. The throws he made look crisp and accurate, and he didn’t look like he was laboring through any of the activity. His teammates noticed the same.

Jamar Newsome – The start of camp is full of light drills and little action between the offense and the defense, but when the two groups got together Newsome was noticeable. Every time the ball was in the air, it looked like No. 85 was coming down with it. Whether the pass was on the mark or a little high, his athleticism showed.

Play of the Day:

Here’s a telling indicator of how scaled-down practice was on Thursday afternoon: the best candidate for a play of the day occurred during the full-team walkthrough to open the practice. Lined up in the slot, Cole Beasley tore off downfield and snagged a nice catch from Romo about 25 yards downfield. He extended both arms and made a fantastic fingertip snag.

Neither player missed from injuries. Carr was out dealing with a family health situation, according to head coach Jason Garrett, while McClain went back home to Alabama early for his trial date Friday.

The coaches weren’t able to work out McClain, as he was signed during a period where the coaches were required to be away from the office, but Garrett said the people around him felt good about where McClain was at physically and decided it was “worth taking a shot to resurrect his career.” Garrett said he won’t rush McClain into anything (as a starter), but he wants to get him integrated quickly into the defense.

Here are some other notes from today:

Cowboys Daily: Quarterbacks Turn It Up | :54 | Mickey Spagnola reports on Tony Romo’s participation and practice, and what Brandon Weeden had to say about assuming the backup quarterback role. (Watch | Listen)

OXNARD, CA. – For the 10th year in a row, a throng of reporters rushed toward DeMarcus after the first practice of Dallas Cowboys training camp. For the first time in 10 years, the DeMarcus in question was DeMarcus Lawrence, not Ware.

Lawrence faced the crush of attention expected of a second-round pick today – especially a second-round pick who was acquired in a trade up. Asked about expectations, the rookie said he wasn’t concerned about any assumed pressure in replacing Ware on the defensive line.

“My mentality is, I have my own expectations, I know what I need to do to be successful and help this team be where we need to be, Lawrence said. “It don’t matter what everybody else’s expectations is, it’s about the team.”

The Boise State product took it one step further when asked to clarify those expectations. Ware, now the Dallas Cowboys franchise sack leader, began his career with eight sacks as a rookie. Lawrence said he expects to do better.

“My expectation is to go out and get 10 sacks, 10-plus sacks – whatever coach needs me to do,” he said. “I really don’t think coach really cares about the numbers, he just cares about us doing our assignment and job, really.”

Lawrence didn’t want to make Ware comparisons, though. As he said following his selection in May, he said “not really” when asked about the pressure of replacing the Dallas Cowboys legend. When asked whether the Cowboys made the right decision in trading up to the No. 34 pick to draft him, however, Lawrence smiled and said “Oh, yeah.”

For now, the goal is to ease into the process – something the Cowboys are doing for the whole roster with two split practices today and tomorrow. Lawrence said he still needs to acclimate to the pro level, but he’s ready to get to work.

“I feel like the tempo is going to pick up a lot more than just the walkthroughs and cleaning up our footwork and our fundamentals,” he said. “This is just the first steps in this process.” 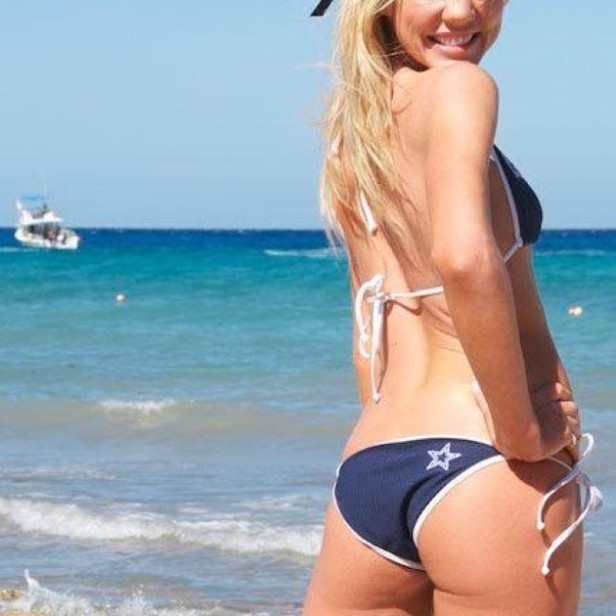