IRVING, Texas – After weeks of speculation, it appears some type of change may be coming to the Dallas Cowboys’ coaching staff.

It’s been suggested that Linehan may serve as a passing game coordinator for Tony Romo and a Dallas passing offense that finished No. 14 in the NFL last year. Coach Bill Callahan’s role in the new hierarchy remains to be seen.

If hired, this will be the second time Jason Garrett and Scott Linehan have worked together. Linehan was the offensive coordinator for the Dolphins in 2005, when Garrett was hired as the team’s quarterback coach. Current receivers coach Derek Dooley was also on that staff as the tight ends coach, all under then-head coach Nick Saban. Linehan was hired as the head coach of the Rams after that season and went 11-25 in three years with St. Louis.

He joined the Lions in 2009 as the offensive coordinator. Linehan’s offense in Detroit finished No. 6 in the league overall and No. 3 in passing in 2013, before coach Jim Schwartz’s staff was released following a 7-9 finish. Linehan looks likely to take over as play caller for Callahan, who assumed that duty last season.

The development falls more or less in line with what Dallas Cowboys owner/general manager Jerry Jones and coach Jason Garrett hinted at from the Senior Bowl in Mobile, Ala., last week. Jones confirmed then that both Callahan and Monte Kiffin, widely speculated to be fired after a disappointing season, would stay on staff in 2014. What the two coaches’ roles would be going forward wasn’t so clearly defined, though.

“Those guys are under contract, and we feel good about that,” Garrett said last week. “We’re always going to try to do things that are in the best interest of our football team, so we’ll keep looking at how we can be better as a staff and what roles everybody is in and what we’re asking them to do.”

If Linehan does in fact take over playcalling duties, it would be the Cowboys’ third play caller in as many seasons. Garrett managed that responsibility from his initial hiring as offensive coordinator in 2007 up until last season, when he ceded the job to Callahan.

Halfway through the 2013 season, Garrett changed the organization of his staff to give himself a role in the process. Rather than Callahan calling plays to quarterbacks coach Wade Wilson, who then relayed the call to Romo, Garrett moved Wilson into the coaches booth and relayed the calls himself.

Despite that change, Garrett maintained that Callahan held playcalling responsibilities for the duration of the 2013 season.

Linehan served as offensive coordinator for Detroit from 2009 until this past season. The Lions finished 26th in overall offense in 2009, Matthew Stafford’s rookie season, and subsequently improved to 17th in 2010, fifth in 2011 and third in 2012.

The Dallas Cowboys plan to retain play caller/line coach Bill Callahan. Callahan is considered one of the better offensive line coaches in the NFL, and the improvement of Cowboys’ blocking front has improved since his arrival in 2012.

You may know that Scott Linehan was the first person to hire Jason Garrett as a coach in the NFL, selecting him to be Miami’s quarterbacks coach when he was the Dolphins offensive coordinator in 2005.

Did you know a call from former Dallas Cowboys quarterback Troy Aikman preceded the hire?

“Jason was looking for a job and hadn’t coached yet,’’ Aikman said. “I called Scott and left him a voicemail and told him if I was starting a business, no matter what the business was, Jason would be one of the first guys I would call to be a part of it. I talked about how smart he was.

“I don’t recommend very many people for anything, but I told him if he made the hire that he would probably be thanking me in a short period of time.’’

Later, when Linehan was the head coach of the St. Louis Rams, Aikman asked him if he ever saw Garrett moving on to be a head coach.

“You know,’’ Linehan replied, “several years ago I got a call from a guy who strongly recommended him.’’ 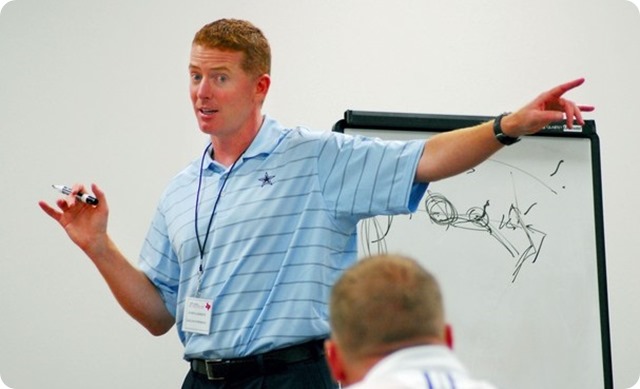 Troy Aikman relayed that story Tuesday afternoon as he other Fox analysts were made available at the media headquarters for Super Bowl XLVIII. Now Garrett has returned the favor, adding Linehan to the Dallas Cowboys staff.

Does Aikman believe that Garrett and Linehan will be on the same page more than Garrett and Callahan?

“But I think Scott has been doing it longer, he’s been calling plays for a long time and has had a lot of success doing it.’’

Bryan Broaddus, the official The Boys Are Back draft scout takes a look at 10 Players that Shined in the NFL Senior Bowl:

Broaddus: Not many teams will like his lack of height but there is no questioning how he played this week. He was the most disruptive player for either squad. His film and work here gives him a nice platform into the Combine.

Official The Boys Are Back ranking: #21 overall | Position rank #2 | Projected Round 1

Broaddus: Didn’t matter who he was facing, he was up to the task. Played left tackle but also took reps at guard where he was just as good. Plays with power and mobility.

Official The Boys Are Back ranking: #12 overall | Position rank #4 | Projected Round 1

Broaddus: Love how this player physically looks. He carries himself well. Knows he is a good player and plays like it. Was always at the side of Falcons receivers coach Terry Robiskie after every play. Can tell this game matters to him.

Broaddus: Physically is a good looking player. Was clearly better than any of the quarterbacks at this game. Has a command and presence while he is leading the team. Can make all the throws, quick with the ball and accurate.

Official The Boys Are Back ranking: #29 overall | Position rank #4 | Projected Round 1-2

Broaddus: This guy catches everything thrown his way. Has deceptive speed and quickness with the ability to separate. Makes plays all over the field. Not afraid to catch the ball in traffic, love his toughness.

Official The Boys Are Back ranking: #96 overall | Position rank #14 | Projected Round 3

Broaddus: I really do like this player a great deal but I do worry about his lacks of bulk. He measured in weighing 243 pounds but he has those types of traits that these defensive coaches are looking for with his ability to go get the ball.

Official The Boys Are Back ranking: #18 overall | Position rank #3 | Projected Round 1

Broaddus: It was a game with nice sized corners and he was one of the biggest at near 6-3. Really thought he did a much better job when he could play press coverage than zone. Was able to move with and handle these receivers. Made plays on ball.

Official The Boys Are Back ranking: #86 overall | Position rank #11 | Projected Round 3

Broaddus: Doesn’t have the best speed or quickness off the ball but finds ways to get open. Very consistent in his route running and even better hands. Plays with some nastiness as a blocker. Is always going to be prepared as a player. Receivers coach told me that you can play him inside or out and it doesn’t matter.

Official The Boys Are Back ranking: #49 overall | Position rank #8 | Projected Round 2

Broaddus: There was a reason why that the rushers on the North squad didn’t have the most productive practices this week because of Zack Martin and Jack Mewhort. Showed nice balance and base. Plays with power. Can get movement. Not a slow footed blocker at all. Helped himself each day with work.

Official The Boys Are Back ranking: #61 overall | Position rank #8 | Projected Round 2

Broaddus: I honestly don’t know where you play him but you need to find a place for him. He is not a linebacker which they tried him at this week during these practices. He is a put his hand on the ground get after the passer. Not athletic enough to drop but when he rushes, he is hard to block. Might be the defense’s version on a 3rd down receiver. Relentless.

Official The Boys Are Back ranking: #90 overall | Position rank #9 | Projected Round 3 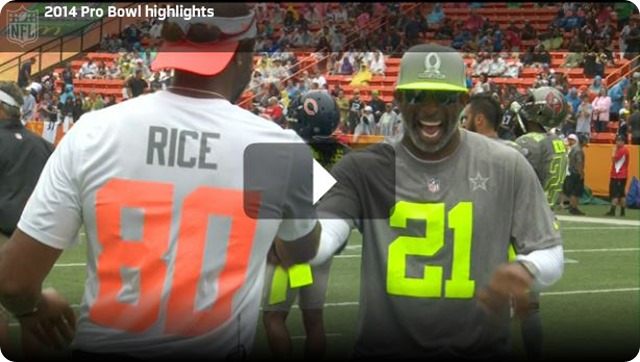 Alex Smith, the final pick in last Wednesday’s Pro Bowl Draft, led Team Rice on the final touchdown drive on a rain-soaked field. Then Jerry Rice and Riverboat Ron Rivera went for two and clinched a 22-21 win over Team Sanders in the first unconferenced Pro Bowl.

This was the best Pro Bowl in a long, long time.

Here’s what else we learned from Sunday’s game (Watch highlight video):

1. Even if the banter was manufactured by the 2014 Pro Bowl Draft, players after the game said they enjoyed the process and the opportunity to play with guys they never had a chance to team with before. It was a theme all week.

3. Speaking of quarterback sacks, the defensive lines dominated. The two teams ended up with nine sacks. Early in the contest, we wondered if Sean Payton would call Team Rice’s coach (and division rival) Ron Rivera and ask him to sit Drew Brees. The Saints quarterback was sacked twice and battered often. The QB pressures were a big reason for all the turnovers.

4. J.J. Watt was a beast. Playing next to Ndamukong Suh and later Greg Hardy, Watt was unblockable. With Team Rice double-teaming Watt, Hardy picked up a sack. Don’t think management in Houston didn’t see that and ponder what Jadeveon Clowney would look like next to Watt.

5. The playful teammate trash talk was constant and likely will linger in texts and tweets the next couple days. Mike Tolbert’s SuperCam mock-celebration after his two-point conversion was emblematic. “I told Cam I was going to mess with him if I got in the end zone, so I had to,” Tolbert said laughing.

6. The lack of continuity on offense clearly hurt the product. Not only were there fewer teammate combinations due to the draft, the new format also lessened the practice time by one day. There were a multitude of miscommunications between quarterback and receiver.

7. Speaking of teammates, Drew Brees hit Jimmy Graham for an early touchdown pass. On the play, Brent Grimes (all 5-foot-10 of him) ended up on the 6-foot-7 tight end. That, friends, is a mismatch.

8. What was going through Kansas City Chiefs defensive tackle Dontari Poe’s mind as he rumbled toward the end zone after his second-quarter interception? “I was thinking of a touchdown celebration dance,” Poe said after the game. “I didn’t get there, but next time I will though.”