Bryan Broaddus and Ed Cahill take a look at how the Cowboys free agent moves could impact the draft, the quarterback position, and also interview the man who has been turning in the Cowboys draft selections for the past 26 years.

Roger Staubach, with his wife Marianne at his side, takes to the microphones at Texas Stadium Monday, March 31, to announce his retirement as quarterback of the Dallas Cowboys. DMN file photo

Roger Staubach, the man who became the yardstick to measure the success of the Dallas Cowboys during the ’70s, announced his retirement from football Monday at one of the largest news conferences ever held in Dallas.

Roger and Marianne Staubach (backs to camera) are shown at Texas Stadium as he announces his retirement from football. DMN staff photo by John F. Rhodes

Good things come to those who wait, and certainly the Dallas Cowboys’ patience in the mid-60’s was supremely rewarded, landing one of the best players in franchise history because they were willing to wait for Roger Staubach to fulfill his military commitment.

For that five years of patience, the Cowboys landed the guy who became better know as “Roger The Dodger” over the next 11 years when he was selected to six Pro Bowls – including five consecutively – and was named the NFL Players Association Most Valuable Player in 1971. Staubach led the NFL in passing four times and was selected to the All-NFC team four times.

“He is one of the finest to ever play the game,” Green Bay Packers Quarterback Bart Starr once said of Staubach. “I think if I had some of that Staubach competitiveness, I’d have been much better.”

Staubach was drafted by the Dallas Cowboys in 1964 from the Naval Academy, but did not join the team until 1969 due to his Navy commitment. Former president and general manager Tex Schramm signed Staubach to a futures contract in a hotel room in 1964, actually scribbling out the details on a legal-sized tablet that would have Staubach paid annually to participate in training camp practices when he had enough leave built up.

The 1963 Heisman Trophy winner showed up in Dallas as a 27-year-old rookie, but in those 11 seasons still managed carve out the franchise’s all-time leading quarterback rating of 83.42 and became a five-time NFL passing champion. But Staubach almost became better known for his scrambling ability, and to this day ranks eighth on the Cowboys’ all-time rushing list with 2,264 yards.

END_OF_DOCUMENT_TOKEN_TO_BE_REPLACED

We still don’t know what coach Chip Kelly’s offense will look like next season, but the Philadelphia Eagles are getting bigger at wide receiver. 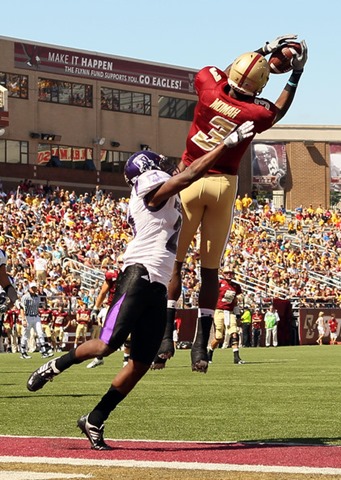 A pair of recent additions — Arrelious Benn from earlier this month and Ifeanyi Momah on Saturday — give the Eagles two taller wideouts.

Benn, who flamed out with the Tampa Bay Buccaneers, is 6-foot-2, and Momah is an outrageous 6-foot-7 and recently clocked a 4.4-second 40-yard dash.

The Eagles announced they agreed to terms on a three-year deal with Momah, who spent all of last season recovering from a knee injury suffered at Boston College as a senior in 2011.

Taller receivers give quarterbacks options in a league trending toward bigger, more physical corners. Philly isn’t the only team mining for larger wideouts.