DALLAS COWBOYS 2013-2014 ROSTER: Chris Jones should be ready to compete at punter 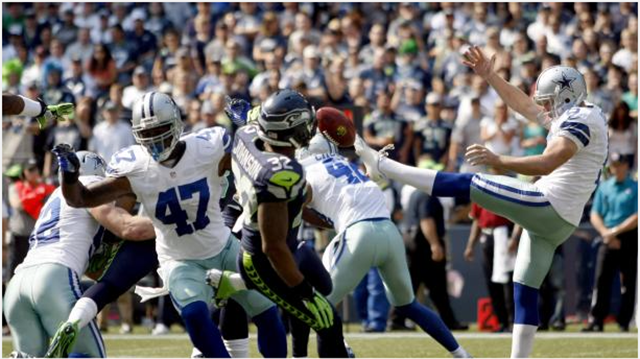 Bryan Broaddus takes a closer look at Dallas Cowboys punter Chris Jones and how he fits into the team’s 2013 plans.

How he played in 2012: Chris Jones was one of those question marks in training camp that no one really wanted to talk about. Jones burst onto the scene replacing the injured Mat McBriar in 2011 and punted well enough to allow the front office to not extend McBriar in 2012 thus making him a free agent. To be honest there were days in Oxnard where it looked like that decision was a poor one because of what a weapon that McBriar had become over his years in Dallas and Jones just wasn’t punting consistent enough but he managed to make it to the start of the 2012 and really did a nice job opening night against the Giants. The next week against the Seahawks, Jones had a punt blocked when Dan Connor missed an assignment and the following week against the Buccaneers somehow managed to get a punt off that should have been blocked but it resulted in an injury to his left knee. In his final game of the 2012 season Jones was able to gut out the game against the Ravens after not practicing all week. Fortunately for Jones, he was only called on one time that day but the knee was too damaged to continue the rest of the season and Brian Moorman took over the punting and holding duties for the club. In four games Jones averaged 45 yards on 12 punts and was on his way to the type of season that the front office and coaches believed he was capable of having.

Where he fits in 2013: Gone is special teams coach Joe DeCamillis and Rich Bisaccia now takes over in that role. Jones had a big supporter in DeCamillis but there is no reason to believe that Bisaccia will feel different about Jones and what talent he has. What will also help Jones is that Chris Boniol is still on the staff and will be able to paint a pretty accurate picture of what Jones is to Bisaccia. I fully expect Jones to be the punter for this club in 2013 but the scouts might have seen someone in their travels this Fall that could compete for the job so we will see after the 2013 NFL Draft when we get into mini camps.

Nick Eatman: He’s one of the injured players people forget about but he was missed. Sure, Brian Moorman has more experience but Jones was better at angling his punts with height and direction. He’s also a good holder for kicks so I would expect Jones should be the punter for this team next year.