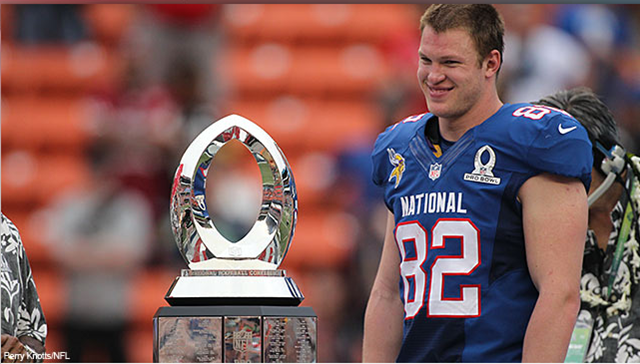 NFL Commissioner Roger Goodell threatened to cancel future Pro Bowls if the players didn’t pick up the effort. He got his wish — for the most part.

The NFC won 62-35 and the game didn’t have any blatant episodes of guys loafing like the 2012 version. Part of that can be attributed to Denver Broncos quarterback Peyton Manning, who spoke to the entire group of participants (see article below) and called the last two years “unacceptable.”

“Peyton said some things and guys took it personal,” Minnesota Vikings running back Adrian Peterson said during a sideline interview.

“It was a little more high intensity than in years’ past,” he said. “It really did feel like a real game out there. People were hitting. It wasn’t touch football; guys were laying some licks. It had the energy of a real game. My body feels like it just went through a real game.”

There were a few questionable moments. Broncos defensive end Elvis Dumervil pulled up when he had a blindside shot to sack Saints quarterback Drew Brees at one point. But there were also hustle moments. Saints punter Thomas Morstead chased down Chiefs safety Eric Berry from behind and was carried into the end zone during an interception return after a botched field-goal attempt. There were even a few solid hits.

Goodell got what he wanted. Defenders actually tackled. No one was injured. There was a reverse on a kick return and a trick onside kick. Watt even got bloody early in the game.

“It definitely was better, especially compared to last few years,” said Broncos cornerback Champ Bailey, who played in a record-tying 12th Pro Bowl. “That’s all they (NFL decision-makers) really want to see. It felt more like a real game. No one let people run past them.”

The overall feeling was that Sunday was a marked improvement from recent Pro Bowls.

KAPOLEI, Hawaii — Ripping off jokes like he was doing the opening monologue on “Saturday Night Live,” Denver Broncos quarterback Peyton Manning was feeling it Tuesday evening. He was back where he belongs, in front of his peers, here at the Pro Bowl, right in his element.

Yet as Manning stood in front of a ballroom full of the NFL’s best players (30 of whom, as he pointed out, are at the game for the first time), Manning wasn’t just being funny during this welcome meeting. He also had a very sharp message.

“The past two years, the play in this game has been unacceptable,” Manning said. “If it was a walkthrough, your coach would say it was a bad walkthrough. And that’s why (the league) could try to cancel this game.”

When practices begin Wednesday, there is expected to be a very different tone, especially emanating from the AFC’s team, in the wake of much public discourse about the future of the NFL’s all-star game.

Commissioner Roger Goodell has made it clear that the current quality of the game doesn’t meet the league’s standard, and a rewarding week enjoyed by the NFL’s best players is in jeopardy. The players now recognize there’s one way to fix this.

“It’s simple,” Broncos cornerback Champ Bailey told NFL.com. “Just play hard. Like you do on a Sunday. If you do that, the rest will take care of itself.”

Whether that’s enough to truly save this game (and, perhaps as importantly, this event) remains to be seen. But if ever there was a year in which the right formula to save the Pro Bowl was in place, this is it.

Manning and Bailey are two of just 10 players in NFL history to make 12 or more Pro Bowls. Manning has the most Pro Bowl berths among quarterbacks, and Bailey has the most among defensive backs. And it just so happens that their current coach, John Fox, has been assigned to coach the AFC this week.

Fox and Manning met over beers Sunday evening, with NFC quarterback Eli Manning also present, to discuss their intent to take things up a notch (or three) during practices. And since both men are very capable of balancing a good time with some hard work, they very well might be the right people to pull this off.

Bailey, for one, was glad Manning also addressed it with both the AFC and the NFC present in the ballroom Tuesday, setting an expectation for the week.

“(Manning’s talk) meant a lot because I think we do get over here and get relaxed,” Bailey said. “The sense of urgency leading up to the game isn’t there. It takes something like that to get you going, to understand the importance of it. I get it. We should play hard.”

While some fans might continue to dismiss this rallying cry as a pointless effort to keep alive a game that doesn’t satisfy the masses, this is much more about an internal desire among players to sustain a tradition that’s important to some veterans, like Manning.

As Manning noted during his speech, his weeks at the Pro Bowl have afforded him the chance to play with seven players already in the Hall of Fame and six coaches who have won Super Bowls, all of which has benefitted him in his career.

“Peyton said it best,” Bailey said. “The players who have played in this game are in the Hall of Fame. If they get rid of this game, guys are going to miss out. You won’t even know who you played against because you never get a chance to meet them. It’s good for that reason and many others.”

Manning’s talk on Tuesday was directed very specifically toward the players in the room — not toward the public masses. It was intended to be heard by rookies like quarterbacks Andrew Luck and Russell Wilson and young defensive players like J.J. Watt. Those are the players who will be around for the next decade. Those are the guys who would be carrying this tradition forward.

Maybe it’s a good thing many of these faces are new to this game, because the quality of play last year truly was terrible, as many players agreed.

Green Bay Packers quarterback Aaron Rodgers, for one, was disgusted by the lack of intensity in that game. While his knee is giving him enough issues to provide a legitimate reason for him to sit this year out, last year’s experience certainly didn’t help. It’s also a reason why Minnesota Vikings running back Adrian Peterson said he plans to play hard this year — so hard that he’d like to be the game’s MVP.

So without question, the tone has been set. Will it matter? Will it be enough to convince Goodell to keep the game in Hawaii for years to come? We’ll see. But if this indeed is the last Pro Bowl, these players plan on making it a good one.

“It’s a really nice atmosphere, and it’s great for relaxing,” Bailey said. “But you’ve got to understand why you’re here, and I think guys have gotten away from that, for whatever reason.

“We’ve got to get back to the way it should be.”