you can LISTEN LIVE to Dallas area sports broadcasts

while you read, browse, or work around the house.

commentary, analysis, and daily/weekly shows with some of the

CLICK ON THE BUTTON BELOW AND LISTEN TO THE POSTGAME SHOW LIVE!

CLICK ON THE BUTTON BELOW AND LISTEN THE POSTGAME SHOW LIVE!

HEAD2HEAD: A look at how the Dallas Cowboys and NY Giants match up

It was not too long ago when the Cowboys went up to northern New Jersey and defeated the New York Giants 24-17. But a lot has changed since that Sept. 5 season opener. The Giants, not the Cowboys, now sit alone atop the NFC East standings. Dallas linebacker Sean Lee is done for the season after suffering ligament damage in his right big toe. And Cowboys running back DeMarco Murray, who rushed for 131 yards in that first meeting with the Giants, is sidelined as he continues to recover from a sprained left foot. The Giants, in totality, are in much better shape than the Cowboys. Here is a look at how both teams match up:

When the Cowboys run

The Cowboys’ rushing attack remains in flux and at this point it’s difficult to project its performance. A week after gaining 227 yards on the ground against Baltimore, the Cowboys managed to collect 85 against Carolina. Of course, tailback DeMarco Murray didn’t play last Sunday and he won’t be available this week as he continues to recover from a sprained left foot. That is a big blow for the Cowboys. Against the Giants in the opener, Murray rushed for a season-high 131 yards – about five more than New York has yielded on average this season. Will Phillip Tanner or Felix Jones, who is nursing a bruised knee, pick up the slack in Murray’s absence?

When the Cowboys pass

Tony Romo’s best performance of the season came in the first game. Romo completed 76 percent of his pass attempts for 307 yards and three touchdowns, posting a 129.5 quarterback rating in the process. Since then, Romo has thrown three more interceptions than touchdown passes. But there is no reason to believe Romo can’t skewer the Giants’ flimsy secondary. New York is allowing 253.3 yards per game through the air, the 12-highest average in the NFL. The question is whether Romo, who has been only sacked once in the past two games, will be able to avoid the Giants’ staunch pass rush.

When the Giants run

The Giants’ running game has improved significantly since last season, when New York was ranked last in yards on the ground. Through seven games, the Giants have produced 116.3 rushing yards per game, the 12th-highest average in the NFL. They have done so while relying on Ahmad Bradshaw, Andre Brown and David Wilson. Yet the Cowboys were able to contain the Giants’ tailbacks in the opener, limiting New York to 82 rushing yards – 23 below the current average they’ve allowed. Of course, linebacker Sean Lee was a big part of that defensive effort. Now he’s out for the season with ligament damage in his right big toe. Will the Giants be able to exploit his absence?

When the Giants pass

The Giants make no secret about their intentions. They will pass the ball, relying on the arm of Eli Manning to power the offense. After Week 7, only three quarterbacks had thrown the ball more times than Manning had. And it’s easy to see why Manning is chucking the ball all over the field. After all he has plenty of targets. Headed by Victor Cruz, who has already made 50 catches, the Giants have six players who have gained more than 100 receiving yards. The Cowboys, who have the third-stingiest pass defense, will try to limit Manning and Co. for the second time this season.

No player this season has attempted more field goals than the Giants’ Lawrence Tynes. He has converted 19 of 21 attempts this season and is part of a special teams unit that includes one of the league’s best directional punters, Steve Weatherford. Weatherford has allowed 5.8 yards per return – the exact average the Cowboys have produced when they have fielded punts. Those modest gains aren’t surprising. Although Dan Bailey has made 92.3 percent of his 13 field-goal attempts, Dallas’ special teams have performed poorly this season.

The Cowboys will have home-field advantage. That should mean something. But in this matchup with the Giants it doesn’t. The Giants have prevailed in all three meetings with their NFC East rivals at Cowboys Stadium. And at this point some wonder if New York feels more comfortable at Jerry World than Dallas does.

For that reason, the Giants have to be brimming with confidence as they invade North Texas seeking revenge for the loss the Cowboys handed them in the season opener.

View game stats and scores online while you watch or listen to the game. Click HERE

GAMEDAY RESOURCES: Watch the game on TV or online 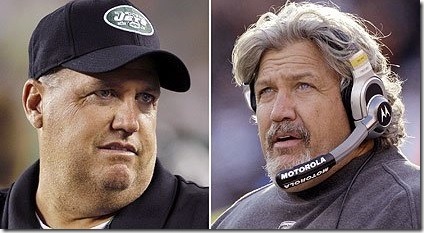 On Wednesday, while discussing Jets linebacker Bart Scott’s toe injury, New York Jets coach Rex Ryan said that his brother was “crying, literally, on the phone because they just lost their great linebacker to a toe injury.”

“That guy’s so full of crap,” Rob Ryan said Friday. “Was I [griping] to him? Sure. We have so many damn injuries, of course I was. He did talk me off the plank. But I wasn’t crying tears, actual tears. I save that for the movies I watch with my wife. You know, Lifetime. My god, you guys ever watch Lifetime? Don’t. Trust me, don’t.”

Rob Ryan said moving on without Lee won’t be easy, especially against the high-scoring Giants. Lee had 14 tackles in the Cowboys’ season-opening 24-17 win at the Giants.

“I understand we played the Giants before and the only reason we stopped them was their lack of execution,” Rob Ryan said. “It had nothing to do with our players or our scheme. We got the message. And like [the Giants] said before, it was all them. That’s the only reason they self-destructed, apparently, against us last time,” Rob Ryan said. “So hopefully they have another bad game. It would take another miracle and it’d be great, though.”

SOURCE: Rob Ryan Press Conference – How Do You Replace Lee?

Rob Ryan Press Conference: How Do You Replace Lee?