Dallas Cowboys games are no longer just four quarters of football. Going to AT&T Stadium is an all-day event, a celebration that starts hours before the first kickoff. Parking lots will fill, grills will be fired up, families and friends will unite as Arlington, Texas, becomes a canvas of blue and silver. 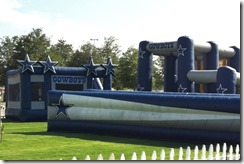 “Everything out in both our plazas is free,” says Matt Coy, executive producer of event presentation for the team. “We don’t charge for anything except food and beverage. We make sure the East Plaza is more of a 21 and up, fun tailgate crowd. The West Plaza is more for families. That’s all ages. We have the Kids Zone out there.”

The East Plaza at the stadium will feature a “Cowboys Tailgate Party,” with food and drink discounts and specials, including $4 sausages and hamburgers, $3 hot dogs and $3 beers and bottled waters to wash them down.

“We program out there four hours before kickoff, until kickoff,” Coy says. “Then we have a DJ out there. Sometimes we’ll play PlayStation and Madden on one of the four big screens.”

Sybil Summers from 105.3 FM “The Fan” hosts the Cowboys’ entertainment stage, which will feature DJ SC and special guest entertainers and performers.

Prizes, including game-used helmets and jerseys, will be doled out to winners of games and contests. Fans can compete in a bag-toss tournament, washer tournament, karaoke contest, dance contests and more.

Of course, the pregame festivities aren’t limited to adults. The Kids Zone in the West Plaza allows children the opportunity to receive free face painting and balloon animals. And, the games aren’t limited to adults in the East Plaza, either. The West Plaza’s Kids Zone offers six free inflatable rides and games, including a quarterback toss, field goal kicking game, obstacle course and bounce houses.

Stilt walkers and jugglers will demonstrate their skills, and Rowdy will even make his way over. While beer will be available in the East Plaza, kids can sip on free hot cocoa for cold days or cold water on hot days on the West side.

Coy says the event presentation team amped the pregame activities up last year, and are continuing to expand and develop new ideas and activities this season.

“This year, we’re adding two new things,” Coy says. “We’re adding two zip lines, so any family members, kids or older, can go on a zip line across the plaza for free. Then we’re also adding a mechanical bull ride for all ages that’s also free.”

The cheerleaders will also sign autographs and take photos with the kids in the West Plaza, though they likely won’t be trying the zip line.

Every home contest for the Cowboys will include a different theme, with corresponding games and activities, including a U.S. Apache helicopter, a tank and flight simulators for the Military Appreciation Game on Nov. 18.

The season began with a celebration of Hispanic Heritage Month for the home opener, while the Week 4 matchup against the Bears is promoting Breast Cancer awareness. The list goes on as the season progresses, the themes also featuring Halloween (Oct. 28), Thanksgiving (Nov. 22), First Responder Appreciation (Dec. 2), an NFL Hall of Fame Ceremony (Dec. 16) and the holidays (Dec. 23).

“We’ve got Santa Claus, reindeer, elves and photo opportunities and gifts for the kids,” Coy says of the team’s plans for the final home game. “We do a bunch of stuff on Christmas. The other games, like the Military and the First Responder Appreciation games, those we have a lot of static displays.”

Whether fans choose to partake in the contests, games, drinks, food, prizes or pregame entertainment, there will be plenty of fun available in the West and East plazas throughout the season.