PHOTO: Where’s the flag? If he’s looking for a flag on the Sean Lee hit … he won’t find one!

The club seemed to be making strides in that area until it ran into a buzz saw in Seattle on Sunday.

From a bullying offensive line to a vicious crack-back block delivered by receiver Golden Tate against linebacker Sean Lee to a couple of big hits on tight end Jason Witten, the Seahawks punished the Cowboys in winning 27-7.

“It starts with our coach,” Seahawks safety Kam Chancellor said of Pete Carroll. “Pete has a lot of energy, and he spreads the energy through us.”

Tate’s hit came with the Seahawks up 20-7 early in the fourth and was credited with helping to take the fight out of the Cowboys.

The blindside hit came on a 14-yard run by rookie quarterback Russell Wilson around the left end. Tate launched himself into Lee’s chest and came up through his chin, a blow that sent the third-year player flying.

“I was trying to hit him a little bit and get him on the ground, but I didn’t realize how hard I hit him,” said Tate, who flexed his muscles to the crowd afterward.

Lee left the field under his own power. After getting checked for a concussion, he returned a few players later.

Asked if it was a dirty play, Lee said, “It’s part of the game, not for me to judge. I’ll watch the film, but I know that can happen any time.”

Asked if he was OK, he added, “Yeah. Well, other than the loss. … I cleared everything from a concussion standpoint. My head didn’t hurt at all. It was more about losing breath.”

The play didn’t result in a penalty even though crack-back blocks against defenseless players are a rules violation. There was a flag on the play, though, but it was against Cowboys linebacker Bruce Carter for unnecessary roughness.

Garrett suggested Tate’s blow should have drawn a flag.

“(Hits against defenseless players) is something the league is trying to guard against, and this was a pretty good example,” he said.

Owner Jerry Jones said he believes the NFL will look at the hit.

Will Golden Tate’s hit on Sean Lee fuel debate on the replacement officials?

Joe Flacco had a chance to make some late-game magic against the Philadelphia Eagles. Unlike Michael Vick, Flacco couldn’t get it done.

After Sunday’s 24-23 loss, the Baltimore Ravens quarterback largely blamed the replacement officials, saying they are "affecting the integrity of the game."

Flacco’s biggest gripe is that replacement refs don’t know what holding is. He also mocked the offensive pass-interference call against Ravens wide receiver Jacoby Jones that wiped away a fourth-quarter touchdown. It’s worth noting a number of shaky calls were made in the game, which took 3½ hours because of delays in making decisions.

"He didn’t even throw a flag, he threw a blue beanie," Flacco said, via Bart Hubbuch of the New York Post.

Flacco even admitted that he sounded like a "big baby" after the game. That didn’t stop him from voicing his discontent.  Click HERE to watch game highlights.

MILESTONES: During the Dallas Cowboys vs. Seattle Seahawks game

Miles Austin’s touchdown catch Sunday gave him 30 for his career to become the 11th Dallas Cowboy with 30 touchdown receptions and tied him with Doug Cosbie for 10th in franchise history.

With his touchdown pass Sunday, Tony Romo tied Roger Staubach for the third-most touchdowns in franchise history with 153.

Anthony Spencer finished Sunday’s game with a pair of sacks for his fifth career multiple-sack game.

Witten’s 58 yards Sunday gave him 7,977 for his career and allowed him to overtake Jackie Smith (7,918) for fourth on the NFL’s all-time tight ends receiving yards list. Witten is just four yards shy of third place, behind Ozzie Newsome (7,980).

Just three days after signing a three-year contract extension that will keep him under contract through 2016, Sean Lissemore had a career-high with 10 tackles.

Linebacker Bruce Carter also had a career-best with 10 tackles Sunday.

SEATTLE – There was a moment in the second half of Sunday’s disappointing loss to the Seahawks where it started to look like the first week of training camp in Oxnard.

That’s the point of camp where injuries were mounting to an extreme and it seemed like the Cowboys couldn’t take two steps without suffering another injury.

Obviously, this was much worse, considering the Cowboys weren’t just playing a real game, but getting manhandled by a more aggressive Seattle squad that was dishing out a few big hits.

But the injuries were occurring in a variety of ways, especially to the defensive side of the ball. Safety Barry Church went out of the game in the first quarter with a quad injury. Gerald Sensabaugh joined him on the sidelines in the second half with a calf strain.

Both players said after the game they would be fine and should play next week against Tampa.

Alex Albright suffered a stinger injury and was in street clothes before the end of the game. Sean Lee missed a few plays after taking a nasty hit but returned on the same drive.

And in the middle of the third quarter, Miles Austin had to go to the locker room to treat dehydration.

The Cowboys typically don’t provide a lot of injury information after the game, but it appears none of the setbacks are deemed serious. Head coach Jason Garrett will likely address the injury situation in his Monday afternoon press conference.

Sunday’s game was the first live action of the season for cornerback Mike Jenkins following a nine month recovery from reconstructive shoulder surgery. Jenkins had missed all of training camp and only on Wednesday did he don shoulder pads for the first time since New Year’s Day.

Jenkins’ role on the defense had been a hot topic in the week leading up to the game and over the offseason, when he had reportedly asked for a trade following the additions of Brandon Carr and Morris Claiborne, which knocked him out of a starting job. As it turned out, he was the Cowboys’ fourth cornerback against the Seahawks, playing on sparingly in passing down sub-packages.

Orlando Scandrick remained the slot corner in the nickel defense. Jenkins played some special teams, but was on the field less than 10 snaps on defense, mostly working deep in prevent coverage or matched up against tight ends. 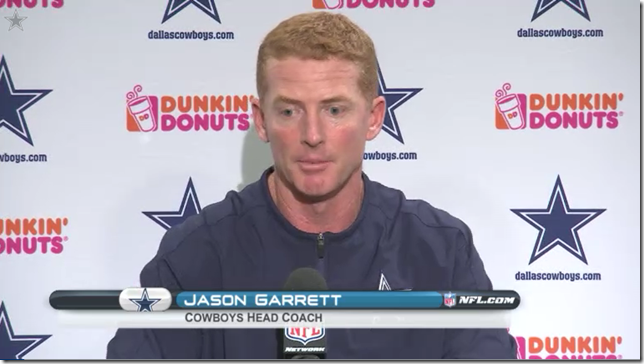