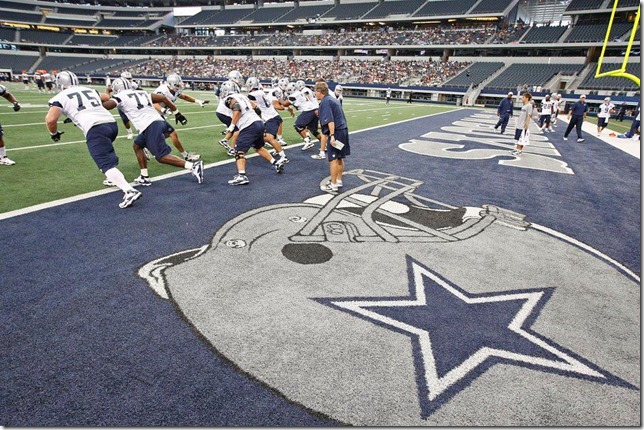 In the third game of the preseason, the “dress rehearsal” for what’s to come on Sept. 5, the Cowboys first-teamers appeared good to go in a 20-19 defeat of the Rams, a team that’s likely headed for a very long and frustrating 2012 campaign. 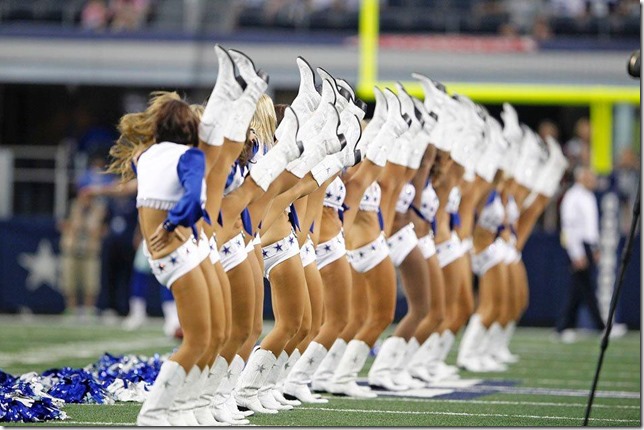 Likewise, Romo saw only one quarter of action, but had his way with the St. Louis secondary, spreading the ball around to six different receivers while racking up 198 yards on 9-of-13 passing, his rating a healthy 151.4. He led his team to points in each of their first three possessions of the game, the opening drive going 60 yards in 13 plays before Dan Bailey split the uprights on a 38-yard field goal.

Romo then struck twice through the air, both his scoring throws connecting with Dwayne Harris, one of several in the thick of the battle for the third wide receiver position. On the first, Harris beat his man down the middle for a nifty 61-yard bomb. Then on the Cowboys’ next possession, Harris appeared headed for the sideline on a routine pickup, but at the last minute, he turned it upfield, split two Rams defenders and scampered the remaining yards before diving into the end zone for a 38-yard touchdown. 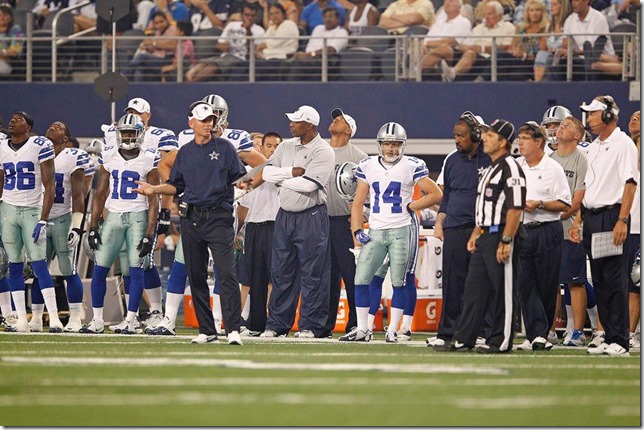 Harris likely solidified his place on the team, finishing with 118 receiving yards on three catches, but he wasn’t the only wideout to have a good showing with the first team offense. Kevin Ogletree picked up 75 yards on five catches with rookie Cole Beasley adding 40 yards on his three grabs. In the end, the Cowboys may not need a designated third receiver, instead taking the committee approach, one of the advantages of having a quarterback like Romo who can make any potential target look good.

Meanwhile, on the other side of the ball, the starting defense played the entire first half, limiting the visitors to lengthy field goals of 55 and 52 yards, the first points allowed by the starters this preseason.

The first of those field goals was set up by a 47-yard kick return that gave St. Louis possession on their own 40. That was followed by a 26-yard pass from Rams quarterback Sam Bradford to tight end Lance Kendricks to the Dallas 34, where the defense then held their ground. 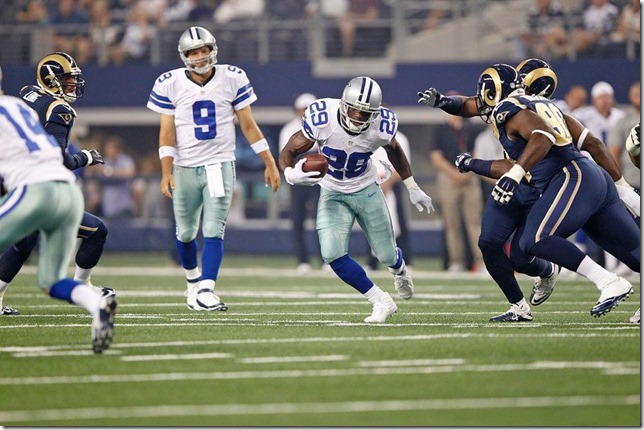 Field goal No. 2 for St. Louis came in the second quarter after Kyle Orton was hit on a blitz up the middle, the Rams falling on the fumble to give them the ball at the Dallas 38. They couldn’t move the chains, but did add three points, the score now 17-6.

The Cowboys defense got their first real test of the preseason with their backs against the wall when the Rams marched all the way down to the Dallas 5-yard line, thanks in part to a successful fake punt when they originally faced fourth and 1 at their own 27-yard line. But on fourth and goal, rookie cornerback Morris Claiborne dove and knocked away a Bradford attempt to receiver Steve Smith, keeping St. Louis out of the end zone.

Safety Danny McCray was injured on the play when he and Gerald Sensabaugh collided as the ball was in the air. He suffered a neck strain and did not return to the game. 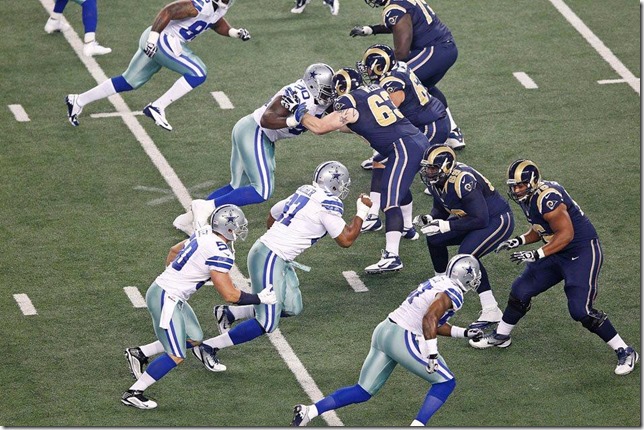 Taking over with 2:42 remaining in the half, Orton then worked the two-minute offense to perfection. He hit Beasley on an 8-yard pass, then found Felix Jones for gains of 12 and 9 yards. Continuing to spread the ball around, Orton found tight end James Hanna for 11, Ogletree for 12, Harris for 9, and then back to Ogletree for 15, the Cowboys calling their last timeout with 10 seconds left at the St. Louis 13-yard line. Bailey came on for the chip shot, the score 20-6 at the break.

In the first half overall, the Dallas defense limited the Rams to just 114 yards of total offense, or four fewer than what Harris alone earned for receiving yards in the first 30 minutes.

With the third quarter getting underway, the starters put on their ball caps and called it a night, leaving it to those fighting for roster spots. And St. Louis won the battle of reserves, scoring two touchdowns in the fourth quarter to make the game a little more interesting. 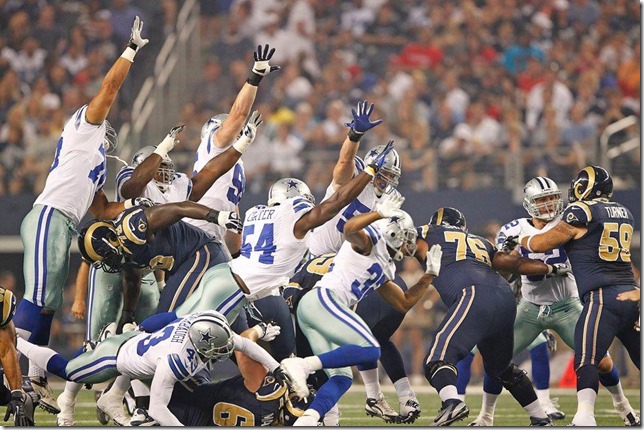 For their first score, the Rams started on their own 30 with 2:42 left in the third quarter, and went the distance, reserve quarterback Kellen Clemens throwing a dart to receiver Austin Pettis from two yards out early in the fourth. But kicker Garrett Lindholm’s extra point was no good, the scoreboard reading 20-12.

Two possession later, St. Louis found the end zone again, this time starting at its own 21 and needing 10 plays on the drive to reach pay dirt. The extra point was good, the score now 20-19. 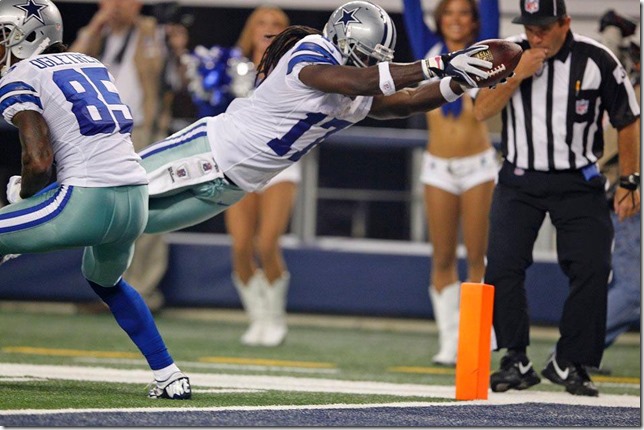 But with 2:10 remaining in the game, that would be all the Rams could muster. Dallas able to run out the clock for their second preseason victory of the season.

The Cowboys will now have an extremely short week as they prepare for their final exhibition game on Wednesday against Miami, a last-ditch tryout of sorts for those fighting for roster spots, the starters content to remain on the sidelines and get ready for the Giants and the season opener a week later. 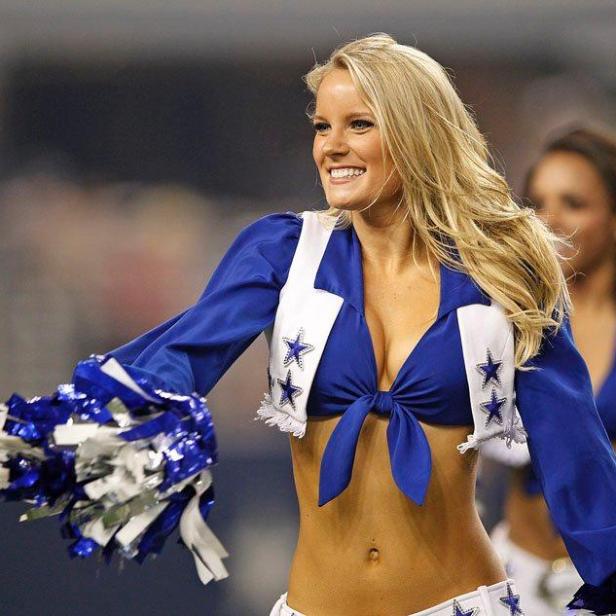