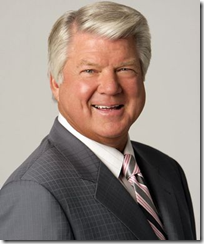 Let’s do a quick flashback to a month ago and a three-way verbal exchange among famous local football names:

Jimmy Johnson, giving opinions weekly on the Fox-TV pre- and postgame Sunday NFL show, said as a fan of Jason Garrett, he would suggest the Cowboys’ young head coach hire an offensive coordinator for next season and concentrate on being a full-time head coach.

Garrett was asked about the opinion, and while pledging his respect for Jimmy, said he would continue as head coach/offensive coordinator in the future.

Jerry Jones was asked for his thoughts on the subject, and immediately shot down the Jimmy idea, saying he didn’t approve of a "walk-around head coach," although not mentioning he’s had three of them — Johnson, Barry Switzer and Bill Parcells, a trio with five Super Bowl titles combined.

"He doesn’t like it because Jerry thinks he’s the walk-around head coach."

So it ended it with that chuckle-moment, and we all moved on.

Until Sunday in the Arizona outback, when one of the strangest coaching blunders in Cowboys history sent the entire NFL into a Garrett-bashing frenzy.

Johnson watched the end of regulation unfold from the Fox football studios in LA. He’s surrounded on the show by Howie, Terry and Michael, meaning an assortment of NFL expertise.

"Stunned… confused," Johnson said Wednesday about the reaction in the Fox room. "Because I admire Jason, and think he has a bright future, I was also disappointed and kind of disgusted."

Speaking from his home in the Florida Keys, Johnson added that while the uproar over Garrett "icing his own kicker" certainly received a lot of media traction, "I can understand the thinking there. That’s not a big deal to me."

But the failure to call the timeout with 26 seconds remaining in a tie game "really doesn’t make any sense at all," continued Johnson.

Back to the "walk-around head coach" theory, which I’m sure Garrett had heard before from Jimmy. After he was named full-time head coach in January, Garrett went to the Florida Keys and spent three days with Jimmy, using him as a sounding board on all things football.

"Look, it’s just my opinion, which is obviously shared by many in football," said Johnson, "but on the other hand, look at the guy in Green Bay, look at the guy in New Orleans, and they are highly successful at calling the (offensive) plays, and making it work.

"Also, go back to a Lombardi or a Landry, and that’s some pretty big names who could be involved in everything and still be great head coaches."

But a key Jimmy point on the walk-around head coach did ring true in the Garrett situation on Sunday.

"Two things: Game management. And the use of timeouts," said Johnson.

"On Sunday, we sit there in the studio and watch every game, and we see it all the time around the league — the questionable end of game management and the questionable use of timeouts," he added.

On that last topic, there are those who blame quarterback Tony Romo as much as Garrett for not taking charge and calling the timeout himself.

"No, that’s wrong," said Johnson. "At least for me, it’s wrong. I think the head coach should be totally responsible for managing the game, and managing all the situations in the game; working the field position and the use of timeouts.

"The OC concentrates strictly on calling plays to get points. The DC strictly on stopping ’em, and the quarterback strictly on executing the play call.

"All the other stuff, including the timeouts, I wanted that put on me, the head coach. It’s your butt on the line, one way or the other, so you should take charge of it."

Did Garrett, as the head coach/offensive coordinator, become "overwhelmed" by the end of game decision-making process?

Nobody but Jason can answer that.

And Johnson repeatedly stressed that his opinion on what would be best in the future for Garrett was/is based on his bias. "I like everything about the guy. I really want him to do well," he added.

The debacle in the desert, and the laughing-stock status that followed, was a severe case of not doing well, and a crisis-point moment that Garrett will also now have to "manage."