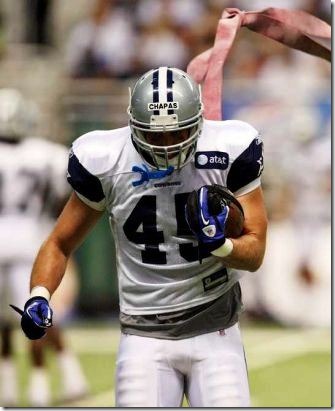 The Cowboys have cut receiver Akwasi Owusu-Ansah and will sign fullback Shaun Chapas off the practice squad, a source said on Tuesday.

The move speaks to the continued uncertainty over the return of fullback Tony Fiammetta who has missed the last games with an unknown illness. The Cowboys trainers and doctors have been puzzled by Fiammetta’s condition and there has been no timetable for his return.

The running game has certainly suffered in his absence. Rookie sensation DeMarco Murray rushed for 601 yards in four games with Fiammetta as the lead blocker. He has rushed in the 160 yards in the two games since.

Third tight end John Phillips has done a good job substituting for Chapas but he is not a true fullback, prompting the move with Chappas and the release Owusu-Ansah, who has served as the primary kick returner.

“We’ve seen how good we are or can be when we have that prototype fullback in there,” Cowboys owner Jerry Jones said Tuesday on his local radio show on KRLD-FM. “We don’t want to in any way put a cookie-cutter approach to what the fullback is. The fullback has unique skills when he’s good, and Tony is good. He knows how to get in the way of the defensive guys. He puts himself in position to help the running back with not necessarily the crushing block, but also the finesse blocks that you have inside there. I think it’s an instinct. He has that. I think we do miss him.”

The Cowboys were able to make the move because they are now using running back Felix Jones on kickoff returns. And with Miles Austin expected to return at receiver, they can use Kevin Ogletree on punt returns as well as Dez Bryant in special situations.