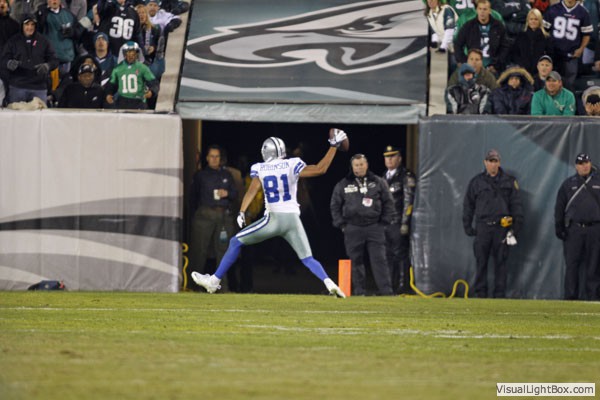 At first glance, many wondered Sunday night why in the world Cowboys wide receiver Laurent Robinson was so animated in spiking the football after his touchdown cut Philadelphia’s lead to 34-7.

Laurent Robinson beat the Eagles’ coverage and worked his way behind the secondary, catching a pass down the right sideline from Tony Romo. Laurent Robinson raced 70 yards for his first touchdown as a Cowboys player that broke the shutout with 12:53 to play in the fourth quarter.

After the score, Robinson jumped in the air and emphatically spiked the football into the end zone with his right hand.

The celebration seemed over the top considering the score, but there’s a back story that explains Robinson’s spike.

During the Cowboys’ bye in early October, Laurent Robinson met a young boy from Dallas named Tyler who was fighting brain cancer. One of Tyler’s wishes was to meet a player from his favorite team, and Laurent Robinson obliged.

During the visit, Tyler told Laurent Robinson that during one of his youth football games he scored a touchdown and spiked the football, receiving a 15-yard unsportsmanlike conduct penalty.

Robinson promised Tyler that when he scored his first touchdown as a Cowboys player that he would spike the football in honor of him.

Laurent Robinson, who led Dallas with five catches for 103 yards against Philadelphia, held true to his word. Cancer battles are close to Robinson’s heart. His mother, Linda Brown, is a 12-year survivor of breast cancer.

After spiking the ball, Eagles fans booed him and threw a few items in his direction near the back of the end zone. Robinson quickly retrieved the bounding ball and carried it to the sideline.

He won’t keep the ball that represents his first touchdown as a Cowboys player. Instead, he plans to give it to Tyler.

About a Crucial Catch

The NFL, its teams, players and the NFL Players Association are proud to support the fight against breast cancer. Our campaign, “A Crucial Catch”, in partnership with the American Cancer Society. Throughout October, NFL games will feature players, coaches and referees wearing pink game apparel, on-field pink ribbon stencils, special game balls and pink coins – all to help raise awareness for this important campaign. All apparel worn at games by players and coaches, along with special game balls and pink coins will be auctioned off at NFL Auction (www.NFL.com/auction), with proceeds benefitting the American Cancer Society and team charities. This is an issue that has directly touched the lives of so many in the NFL family, and we are committed to helping make a difference in breast cancer prevention.